Bell pepper, also known as sweet pepper or a pepper (in the United Kingdom, Canada and Ireland) and capsicum (in India, Pakistan, Australia, Singapore and New Zealand), is a cultivar group of the species Capsicum annuum. Cultivars of the plant produce fruits in different colors, including red, yellow, orange, green, chocolate/brown, vanilla/white, and purple. Bell peppers are sometimes grouped with less pungent pepper varieties as "sweet peppers". Peppers are native to Mexico, Central America and northern South America. Pepper seeds were later carried to Spain in 1493 and from there spread to other European, African and Asian countries. Today, China is the world's largest pepper producer, followed by Mexico and Indonesia.

Ideal growing conditions for bell peppers include warm soil, ideally 70 to 84 °F, that is kept moist but not waterlogged. Bell peppers are sensitive to an abundance of moisture and excessive temperatures.

The misleading name "pepper" was given by Christopher Columbus upon bringing the plant back to Europe. At that time peppercorns, the fruit of an unrelated plant originating from India, Piper nigrum, was a highly prized condiment; the name "pepper" was at that time applied in Europe to all known spices with a hot and pungent taste and so naturally extended to the newly discovered Capsicum genus. The most commonly used alternative name of the plant family, "chile", is of Mexican origin, from the Nahuatl word chilli or xilli. Bell peppers are botanically fruits, but are generally considered in culinary contexts to be vegetables.

While the bell pepper is a member of the Capsicum genus, it is the only Capsicum that does not produce capsaicin, a lipophilic chemical that can cause a strong burning sensation when it comes in contact with mucous membranes. (An exception to this is the hybrid variety Mexibelle, which does contain a moderate level of capsaicin, and is therefore, somewhat hot). The lack of capsaicin in bell peppers is due to a recessive form of a gene that eliminates capsaicin and, consequently, the "hot" taste usually associated with the rest of the Capsicum genus.

The terms "bell pepper", "pepper" or in India, Australia and New Zealand "capsicum", are often used for any of the large bell shaped fruits, regardless of their color. In British and Canadian English, the fruit is simply referred to as a "pepper", or additionally by color (as in the term "green pepper", for example), whereas in the United States and Malaysia, they are usually referred to as "bell peppers". Canadian English uses both "bell pepper" and "pepper" interchangeably. In some countries in Europe, the term "paprika", which has its roots in the word for pepper, is used – sometimes referred to by their color (e.g., "groene paprika", "gele paprika", in Dutch, which are green and yellow, respectively). The bell pepper is called "パプリカ" (papurika) in Japan. Paprika also refers to the powdered spice made from the fruits in the Capsicum genus. In Switzerland it is mostly called "peperoni", which is the Italian name of the fruit. In France, it is called "poivron", with the same root as "poivre" (meaning "pepper"), or "piment". In Korea, the word "피망" (pimang from the Japanese piiman) refers to green bell peppers, whereas papurika (from paprika) refers to bell peppers of other colors.

Most often bell peppers are green, yellow, orange, and red (between stages of ripening). More rarely, color can be brown, white, rainbow, lavender and dark purple, depending on the variety of pepper. Most typically, unripe fruit are green or, less commonly, pale yellow or purple. Red bell peppers are simply ripened green peppers, although the Permagreen variety maintains its green color even when fully ripe. Green peppers are less sweet and slightly more bitter than yellow or orange peppers, with red bell peppers being the sweetest. The taste of ripe peppers can also vary with growing conditions and post-harvest storage treatment; the sweetest are fruit allowed to ripen fully on the plant in full sunshine, while fruit harvested green and after-ripened in storage are less sweet.

Red and green bell peppers are high in para-coumaric acid.

The characteristic aroma of green peppers is caused by Methoxypyrazines (IBMP). Its detection threshold in water is estimated to be 2 ng/L. The same chemical is responsible for characteristic Cabernet Sauvignon green note. 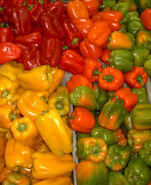 A variety of colored bell peppers 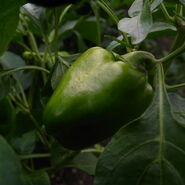 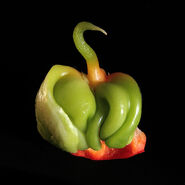 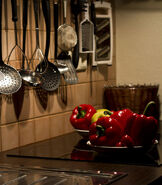 Green bell pepper plant
Add a photo to this gallery

Retrieved from "https://chilipeps.fandom.com/wiki/Bell_pepper?oldid=4267"
Community content is available under CC-BY-SA unless otherwise noted.