Capsicum annuum is a species of the plant genus Capsicum native to southern North America and northern South America. This species is the most common and extensively cultivated of the five domesticated capsicums. The species encompasses a wide variety of shapes and sizes of peppers, both mild and hot, ranging from bell peppers to chili peppers. Cultivars are descended from the wild American bird pepper still found in warmer regions of the Americas. In the past some woody forms of this species have been called C. frutescens, but the features that were used to distinguish those forms appear in many populations of C. annuum and there is no consistently recognizable C. frutescens species.

Although the species name annuum means “annual” (from the Latin annus “year”), the plant is not an annual and in the absence of winter frosts can survive several seasons and grow into a large perennial shrub. The single flowers are an off-white (sometimes purplish) color while the stem is densely branched and up to 60 cm tall. The fruit is a berry and may be green, yellow or red when ripe. While the species can tolerate most climates, C. annuum is especially productive in warm and dry climates.

The species is a source of popular sweet peppers and hot chilis with numerous varieties cultivated all around the world.

In British English, the sweet varieties are called red or green peppers and the hot varieties chillies, whereas in Australian and Indian English the name capsicum is commonly used for bell peppers exclusively and chilli is often used to encompass the hotter varieties. Americans call the sweet types "peppers" and the hot ones "chili peppers" or "chilies" (sometimes spelled "chiles").

Sweet peppers are very often used as a bulking agent in ready-made meals and take-away food, because they are cheap, have a strong flavor, and are colorful. Foods containing peppers, especially chili peppers, often have a strong aftertaste due to the presence of capsinoids in peppers. Capsaicin, a chemical found in chili peppers, creates a burning sensation once ingested, which can last for several hours after ingestion.

Hot peppers are used in medicine as well as food in Africa and other places around the world.

"It is employed in medicine, in combination with Cinchona in intermittent and lethargic affections, and also in atonic gout, dyspepsia accompanied by flatulence, tympanitis, paralysis etc. Its most valuable application appears however to be in cynanche maligna (acute diphtheria) and scarlatina maligna (malignant Scarlet fever, used either as a gargle or administered internally.)"

Some cultivars grown specifically for their aesthetic value include the U.S. National Arboretum's Black Pearl and the Bolivian Rainbow. Ornamental varieties tend to have unusually colored fruit and foliage with colors such as black and purple being notable. All are edible, and most (like Royal Black) are hot. 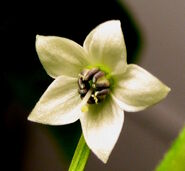 Bolivian Rainbow with its fruits in different stages of ripeness.

Community content is available under CC-BY-SA unless otherwise noted.
Advertisement