The jalapeño is a medium-sized chili pepper. A mature jalapeño fruit is 2–3½ inches long, and is commonly picked and consumed while still green, but occasionally it is allowed to fully ripen and turn crimson red. It is a cultivar of the species Capsicum annuum originating in Mexico, which is a bush that grows 2–4 ft tall. It is named after Xalapa, Veracruz, where it was traditionally cultivated. About 5,500 are dedicated for the cultivation in Mexico, primarily in the Papaloapan River basin in the center of the state of Veracruz and in the Delicias, Chihuahua, area. Jalapeños are cultivated on smaller scales in Jalisco, Nayarit, Sonora, Sinaloa, and Chiapas. Jalapeño juice is often used as a remedy for seasonal allergies and cardiovascular problems.

The jalapeño is variously named in Mexico as huachinango and chile gordo. The cuareeño closely resembles the jalapeño. The seeds of a cuaresmeño have the heat of a jalapeño, but the flesh has a mild flavor close to a green bell pepper.

The name Jalapeño is of Spanish origin. The Spanish suffix -eño signifies that the noun originates in the place modified by the suffix, similar to the English -(i)an. The jalapeño is named after the Mexican town of Xalapa (also spelled Jalapa). Xalapa is itself of Nahuatl derivation, formed from roots xālli "sand" and āpan "water place."

Template:As of, Template:Convert in the United States were dedicated to the cultivation of jalapeños. Most jalapeños are produced in southern New Mexico and West Texas.

Jalapeños are a pod type of Capsicum. The growing period is 70–80 days. When mature, the plant stands 2.5 to 3.0 ft tall. Typically, a plant produces 25 to 35 pods. During a growing period, a plant will be picked multiple times. As the growing season ends, jalapeños start to turn red, which may make them less desirable. Jalapeños thrive in a number of soil types and temperatures, provided they have adequate water. Once picked, individual peppers may turn to red of their own accord. The peppers can be eaten green or red.

Jalapeños have 3,500–8,000 Scoville units. Compared to other chilis, the jalapeño heat level varies from mild to hot depending on cultivation and preparation. The heat, caused by capsaicin and related compounds, is concentrated in the membrane (placenta) surrounding the seeds. Handling fresh jalapeños will cause skin irritation. Some handlers wear latex or vinyl gloves while cutting, skinning, or seeding jalapeños. When preparing jalapeños, hands should not come in contact with the eyes, as this leads to painful burning and redness. 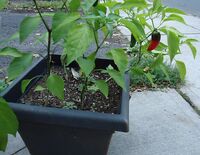 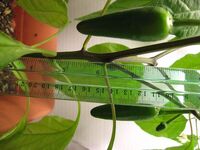 A jalapeño plant with pods, the purple strips on the stem are anthocyanin, due to the growth under blue-green spectrum fluorescent lighting

Community content is available under CC-BY-SA unless otherwise noted.
Advertisement